Jerome Powell Testifies on Capitol Hill
Commenting that the economy is in a "very good place," Federal Reserve Chairman Jerome Powell told congressional legislators that he did not currently see a significant recession risk.
"There's nothing about this expansion that is unstable or unsustainable," Powell remarked during his semi-annual report to the House Financial Services Committee. He did reiterate that the central bank was "carefully" watching the coronavirus outbreak, and that it could "very likely" have residual economic impact on the U.S.[3]
Yearly Inflation Reaches 2.5%
Consumer prices have not advanced to this degree since the 12-month period ending in October 2018. Underneath this January headline inflation number, core inflation (minus food and energy prices, which are often volatile) was up 2.3% year-over-year.
These numbers are from the Consumer Price Index, maintained by the Bureau of Labor Statistics. The Federal Reserve monitors inflation using its core personal consumption expenditures (PCE) index, which remains below the central bank's 2% yearly inflation target.[4]
Gains in Retail Sales, Sentiment
The Census Bureau said retail sales were up 0.3% in the first month of the year, matching the consensus forecast of analysts polled by MarketWatch. Additionally, the University of Michigan's preliminary February consumer sentiment index monitoring consumer confidence factors went back above 100 last week (100.9).[5]
Final Thought
The S&P 500 has risen more than 1% since the coronavirus surfaced. During the SARS epidemic of 2003, the MERS outbreak of 2013, and the 2015-16 Zika virus breakout, the index declined.[6]
THE WEEK AHEAD: KEY ECONOMIC DATA
Wednesday: The Federal Reserve releases minutes from its January meeting, and the Census Bureau presents data on January residential construction activity.
Friday: The National Association of Realtors issues its latest existing home sales report.
Source: MarketWatch, February 14, 2020
The MarketWatch economic calendar lists upcoming U.S. economic data releases (including key economic indicators), Federal Reserve policy meetings, and speaking engagements of Federal Reserve officials. The content is developed from sources believed to be providing accurate information. The forecasts or forward-looking statements are based on assumptions and may not materialize. The forecasts also are subject to revision.
THE WEEK AHEAD: COMPANIES REPORTING EARNINGS
Tuesday: Medtronic (MDT), Walmart (WMT)
Wednesday: Analog Devices (ADI), NetEase (NTES)
Thursday: Dominos (DPZ), Hormel Foods (HRL), Southern (SO)
Friday: Deere & Co. (DE), Royal Bank of Canada (RY)
Source: Zacks, February 14, 2020
Companies mentioned are for informational purposes only. It should not be considered a solicitation for the purchase or sale of the securities. Any investment should be consistent with your objectives, time frame and risk tolerance. The return and principal value of investments will fluctuate as market conditions change. When sold, investments may be worth more or less than their original cost. Companies may reschedule when they report earnings without notice. 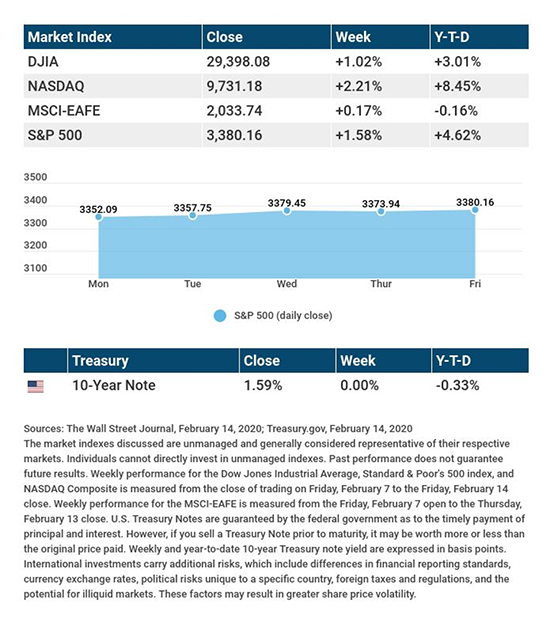